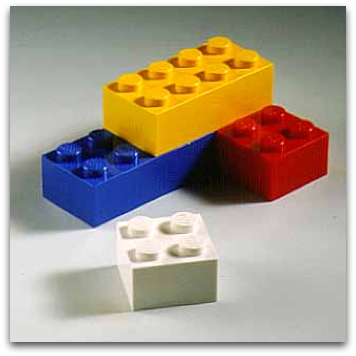 Pictured at right is one of the great inventions of the twentieth century, the Lego block. The basic blocks, patented in 1958 and still compatible with pieces made today, allowed kids to build and rebuild their own toys - and the building and redesign itself was the play activity. Over the years Lego added new pieces - different dimensions, gears, axles, wheels, figurines, and so on - all compatible with earlier designs, and each new design enabling another infinity of possibilities for play. The results can be astonishing.

These stepping stone technologies are very similar to the iterations of Lego block designs. Each stepping stone allows a broad range of new capabilities, and builds on the prior capabilities developed. And just as a single Lego piece by itself is not particularly impressive, the development of these stepping stone technologies by themselves are not nearly as lofty a goal as "Apollo on steroids". Instead the primary goal of these technologies is to provide logistical (and hence economic) leverage and jumpstart the space industry, enabling sustainable human expansion through cislunar space and then the rest of the solar system: more Bang for the Buck Rogers.

I have tried to categorize the stepping stone technologies below. For some of these stepping stones it makes sense to wait until other stepping stones are in place before beginning major work and bending metal. Others can be started right away or are already being worked on by NASA and/or the space industry. This list is not exhaustive, but I figure it's a good starting point for discussion if nothing else. There are non-technological stepping stones, too, but that's a topic for another blog post.

from Earth to Low Earth Orbit and backvehiclesorbital assetslife supportorbital operationsdelta veeguidance, navigation, and controlpower
Posted by Ed at 5/26/2010 02:40:00 AM
Email ThisBlogThis!Share to TwitterShare to FacebookShare to Pinterest
Labels: NASA, space, VSE

Another advantage of a pod is your manipulators can give you finer control than a gloved hand.

Hangers and dry docks don't need to be permanent structures at first. Just build one around the object you want to work with using reusable tinker toy framing wrapped with an air tight material (also reusable or cheap and light.)

When done, vacuum up as much air as you can and take the thing apart enough for the object to escape (essentially the whole thing is an airlock; just not attached to anything.)

Lots of great ideas! I've been advocating many of these for years.

Regarding nodes for Plationic solids I had designed a Lego like bock for octahedra and tetrahedra. Each face has male/female connector. Since a 4 or 8 faced block with holes and protrusions isn't amenable to a two-part mold, I broke these blocks into triangular panels: Delta Blocks

Such panels could be stacked into a compact space and thus walls for a substantial volume could fit within a rocket fairing of plausible size.

I don't know of a way to stack icosohedra and dodecahedra to fill space.